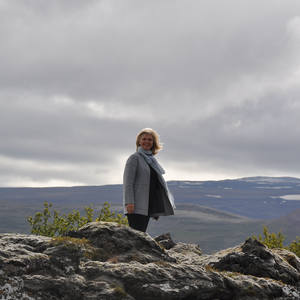 My name is Annette Goessel. I’m an abstract painter from Berlin, Germany.

KH: You grew up in Lübeck, studied in Stuttgart and Vienna and have now been living in Berlin for a quite a while.What was it that brought you to Iceland a few years ago?

AG: It was twelve years ago in Berlin that my family and I were invited by Icelandic friends to visit their country. We were lucky enough to have enjoyed a journey that was very particular, personal and adventurous. That was probably the reason Iceland became a “love at first sight” country for me and I became an “Icelandophile”.

KH: Iceland is quite popular with many people as a tourist destination. What was it that interested you artistically? Why did you decide to work there?

AG: It's true, there is plenty of tourism in Iceland by now. A lot is changing in the country. Nevertheless, there are still largely uninhabited landscapes. Color harmonies, structures, light direction, glacier formations, lava fields, snow, water, rock ... Back in my Berlin studio, the visible and invisible forces of nature had a lasting effect on me. When I was given the opportunity to work as an artist in residence in Kolsstaðir, I was right in the middle of this Nordic materiality.

KH: How did these forces of nature, this Nordic materiality affect your painting? In the past you often used metallic colors – gold, copper, silver – in your paintings. Do the natural forces of Iceland have anything to do with their disappearance?

AG: When I was working with metallic paints, I lived with different references and placed myself in a different context.The main theme was ornament, and I painted silver, copper, gold as representative colors par excellence, in geometric meanders. After my first visit to Iceland I painted two further large paintings with silver running down the canvas. Maybe these are “transitional images”.But then I deliberately distanced myself from this painterly system of unchanging formulations. I wanted to re-enter somewhere entirely different. Iceland was after all an exit from complexity, a quest for new painterly possibilities.

KH: An exit from complexity? Does this beautiful wording also hint at a certain “back to nature”?

AG: Or back to the beginning? Or resigned happiness?Historically, the glorification of the empty landscape is something relatively new. In the past it was the Arcadian landscapes that were perceived as beautiful; and it is perhaps only a supersaturated society that can perceive this extremely empty landscape as beautiful. You question yourself.... and to paint in seclusion, outside in the elements, also means to lose yourself, and something else can come up in this free space.The weather, culture, nature – these are big themes. They are clearly present in Iceland.

KH: The weather... and the climate! Climate change and the climate crisis are clearly noticeable and visible in Iceland. In August a large glacier, the Okjökull, was ‘buried’ there. Scientists had already declared it dead in 2014 because the ice had melted. This former glacier is now called Ok – and that's the title of one of your paintings in the exhibition. Your Ok is a tondo – a circular picture. This format since antiquity has often been used for decorative purposes in architecture ...Why did you choose this circular format for the dead glacier?

AG: In antiquity, it was man at the center of a tondo, because he still had to be sought. In my case it is nature.
The circle as a symbol for unity, completeness, as a densification of energy. An ode to nature. When I was in Iceland, I was told that the weather forecast, especially on Saturdays, is still today of great interest and importance. Knowing what the weather is like throughout the country is also a safety issue. In addition to air and ocean currents, the weather is also significantly influenced by glaciers.
More: https://www.annettegoessel.de