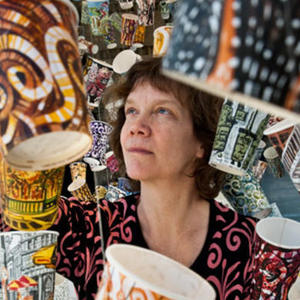 New York City artist, Gwyneth Leech has exhibited her drawings, paintings and installations across the United States and the United Kingdom in a wide variety of museum, commercial gallery, public art and alternative spaces. Since the middle of 2015, she has been focused on documenting in oil paintings and ink drawings the progress at numerous interior and exterior construction sites in Midtown Manhattan as the area undergoes major physical and demographic changes.

Gwyneth Leech’s artwork has been featured in the New York Times, the Village Voice, international print media and on NY1 News. She is the subject of a multi-award winning short documentary, The Monolith, by New York filmmaker, Angelo Guglielmo. In November 2019, her construction paintings were featured on 1700 video kiosks across all five boroughs as part of Link NYC’s “Art on Link” public art project.

2013
"365 a Year in Cups" will be in the window of Anthropologie Harvard Square, Cambridge MA. November

2010
All in the Family, Islip Art Museum, Islip, New York

1999
Scottish Spirit, at the Gallery of Contemporary Art University of Colorado at Colorado Springs, CO

Scottish Spirit, at the Arthur Ross Gallery, University of Pennsylvania, Philadelphia
and at the Centre for Innovative Print and Paper,
Rutgers University, New Brunswick, New Jersey

A Patch of their own, Compass Gallery, Glasgow