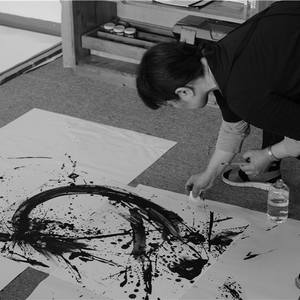 Born in Tokyo, Hiroko Imada studied at the Tokyo Zokei University and later at the Slade School of Fine Art (University College London). Her degree show in 1992 caught the attention of The Times art critic David Cohen, who described her work as ‘heralding an impressive new
talent’. In 1992, Imada was awarded the British Council Fellowship for her achievements at the Slade. She is now based in London.

From her early youth, Imada’s favoured subjects have been ‘Nature’ and ‘Dance and Movement’, and although she likes to work in various different media such as printmaking, painting, and site specific installation, a strong sense of continuity runs through all her works.

She has exhibited throughout Europe and Japan, and a number of her exhibitions have been featured at Japan-related events and in the official magazine of the Embassy of Japan. Her solo exhibition in 2013 at the Riverside Studios Gallery in London, for example, was part of the ‘Japan 400’ event which celebrated the 400th anniversary of Japanese-British relations.

Her solo exhibition in 2015 was produced by the Children’s Art Centre Pessi, in Vantaa, Finland, and was broadcast by Yle TV News. Her print works have been featured in the prestigious Saatchi Art Online collection.
In 2015 she was commissioned by the British luxury phone manufacturer Vertu to produce an art work for their new phone, Aster Yosegi Wood (made in a limited edition of 50). The whole process of creation was filmed and used for the advertising campaign.
In 2017, Imada created a giant paper wave interactive installation work at the Great Court of the British Museum as a part of 'Hokusai, beyond the Great Wave’ exhibition official event - Hokusai: Making Waves.
Imada is scheduled to create an intalactive installation with children at the Coventry Cathedral in Spring 2021.

Imada also specialises in teaching Japanese woodblock printing, papermaking, folded screen making, and hanging scroll making. In 2000 she established the Japanese woodblock printing course at the British Museum and in 2017 at the Prince’s Foundation School of Traditional Arts, and has been teaching it in both organisations regularly since then. She has taught Japanese art related workshops at the Chester Beatty Library in Dublin each year since 2008.

Commissioned by Universal Pictures, Oct 2019
Created a painting used for a key scene of "Fast and Furious 9". The film was premiered June 2021.

Commissioned by Vertu Oct 2015
Imada was commissioned to create an art work for Vertu's new phone 'Aster Yosegi Wood' limited edition of 50. To view the campaign materials please click the site below.
http://www.vertu.com/gb/en/live-extraordinary/experience/aster-yosegi-wood/

Sep - Oct 2015
Finlandia Rhapsody, the Children's Art Centre, Vantaa, Finland
The exhibition was on Yle News and the article on their online site.
https://www.youtube.com/watch?v=PjJo0Dt-C1I
http://yle.fi/uutiset/artist_puts_japanese_stamp_on_finnish_forest_scenes/8327019