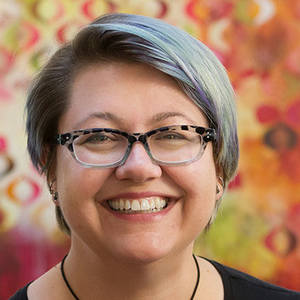 A love of structure led me to study architecture in school, which fueled a fascination with how people choose to decorate the spaces around them. I indiscriminately love pattern and color - if it’s decorated and brightly colored, I’m attracted to it. I adore the handmade and the accidental, and have a fondness for the imperfect - imperfection is what makes us human, and I want to celebrate the best parts of being human.

When I began my abstract art practice, I was working in collage and mixed media, but transitioned to mostly acrylic painting because I like having full control over my colors and materials. So now I call myself a painter, although you’ll still sometimes see some collage elements worked into my paintings.

Since 2007, I’ve been painting in my tiny studio in the Mission Bernal neighborhood of San Francisco. I travel as often as I possibly can, and study a few foreign languages so I am more comfortable at my destinations. In my free time, I crochet fancy lace, collect loud vintage neckties, and experiment with crazy hair colors.