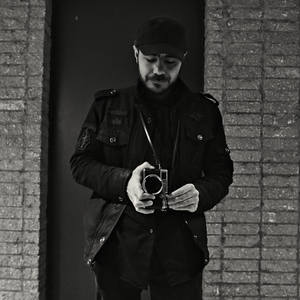 The Hobotographer (Amin habbal) is a Montreal based street photographer and musician. Spending the better part of his time making street photos and relaxing at cafes, he is dedicated to creating some of the most beautiful and organic photos around (his music is pretty good too). His style can be summed up as raw and organic, shooting scenes as they are. He shoots high-contrast black & white as well as color photographs, sharing the day to day in Montreal among other places. Amin Habbal is an avid couchsurfer and is known for hosting various events in the summer including a photo walk where he gives photo tours of Montreal’s famous Plateau/Mile-end neighborhood. After many request Amin Habbal has Ventured into the realm of gallery and exhibition work, with many events in the works for 2018.

Amin Habbal has been producing trance music for well over a decade under the name Calgar C with releases on a number of record labels. In 2015 he launched his own record label called Elektric Cafe. The label aims to bring various styles of Trance including Psy, Goa, Prog, Tech and a bit of Uplifting Trance out into the world. Elements Radio is a weekly podcast host by Amin Habbal under the alias Calgar C. The idea behind the show was to share his love for Trance music with the world. The podcast is available fridays on mixcloud, with almost 200 episodes to date.