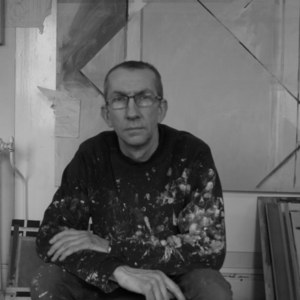 The daily production of McKay's personal practice gives an opportunity to convey his interests through visual means.
He is motivated to succeed in drawing mass attention and engaging with the viewer to create an increased understanding of the subject matter represented in the works.
Throughout the process development of each project he creates, his practice constantly looks at other artists/art forms, visual interpretations of the chosen subject matter.
The present work is inspired by several artists/photographers including artists Turner, Matisse, Jasper John's, Ed Rushca and Francis Bacon. Photography by Tony Ray Jones and Martin Parr has also influenced his personal practice. His practice needs constant discipline which comes from continual life drawing sessions which have developed on occasion into short painted life studies to gain a decisive control of paint. These studies have been influenced by the works of Bacon, Euan Uglow and Lucian Freud.
Studio @Rogue Artists Studios , Manchester