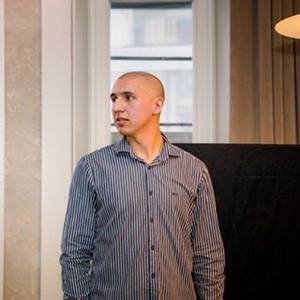 Igor Gnativ is an artist whose works were created in hyper-realistic style. Before saying a few words about a young artist, it would be a good idea to reveal the essence of the term and the phenomenon of hyper-realism. So, according to encyclopedia information, Hyper-realism is a trend in painting and sculpture that emerged in the United States in 70s of the XX century. Another name for hyper-realism is photo-realism. Artists of this direction imitated pictures by means of paints on canvas. They depicted the modern city world: shop windows and restaurants, metro stations and traffic lights, residential buildings and street walkers. In this case, special attention was paid to shiny surfaces, reflecting the light: glass, plastic, polishing cars, and more. The game of reflection on such surfaces creates the impression of inter-fusion of spaces. The goal of hyper-realists was to picture the world not only authentic, but also very realistic. To do so, they used mechanical methods of copying photos and increasing them to the size of a large canvas (dioproject and large-scale grid). The paint, most commonly, was sprayed with an airbrush to preserve all the peculiarities of the image, to exclude the manifestation of the individual handwriting of the artist.

He was born in the city of Zolochiv, and since an early age he started to draw. He graduated from Lviv State College of Decorative and Applied Arts named after Ivan Trush, Department of Restoration of Works of Painting, which he entered in 2011. After receiving the Bachelor’s degree, he continued his studies at Lviv National Academy of Arts, Department of Sacred Art.
Therefore, having a remarkable experience, young artist feels himself comfortably in the style of hyper-realism. He is the author of the series «The World Inside-Out», which can be described as portraits of the head and semi-figures. As a hyper-realist, in his work he excessively referred to every single detail of each fragment. The color palette is rich for shades and tones.