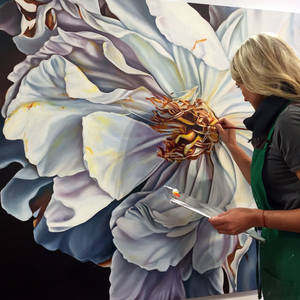 This blog was written few weeks ago for my upcoming show in Vancouver, the words accurately capture me as an artist and give you a complete picture of my journey.

"Irina Gretchanaia’s work begins with color. She started out with graphite and watercolor when she was first curious about drawing, becoming more and more attentive to pigment detail as she learned her art. The color is where the art began, and now as a professional artist, she works primarily with oils to satiate that ongoing fascination. Color is, as she says, the beginning, but it’s how she blends color with movement that grips you. A part of her method involves taking the photographs she paints herself, both to encourage the accuracy of details, and to find the movement she’s looking for.
Now, keeping in mind it's my job to be clever with words, I really love it when people say or do something in a way I've never thought of before. One reason writers and painters make good allies is because painters like Irina say things such as:
"When I take a photograph I am looking for the flower to do a dance. Movement is so important to my work and I want my flowers to continue that motion right on canvas."
I love that idea; you can indeed take a photo of a flower and then simply paint it, but what does it look like when you're thinking of it as a continuation rather than a recreation? Imagine a flower in motion, in the wind, and a picture freezing it, and a brush continuing that motion onto a canvas. That's what her work is. Her portraits of the natural world, and flowers, naturally, showcase her ability to see a through-line in objects. They are never stagnant, no matter what she is painting. Flowers, yes, and landscapes, and people, and their commonality: lithe, moving color that doesn't stop when it dries.
I feel good about myself when I see something in artwork that I can later rationalize by discovering more about the artist. With Irina, I learned that her background, and in fact, her initial career path was as a fashion illustrator, and I went “I knew it!” as if I had the slightest clue. Here’s why: paintings of flowers are no rarity, but the beauty of common subject matter is the opportunity to show a powerful individuality by doing something that is done often. The skilled use of colors in Irina’s work speaks for itself, and we talked about that, but there’s something else in her oils I wasn’t expecting to see, that I realized later. You can look at a painting of a flower and see beauty, and color, yes, but when Irina paints one you see a flower that you could almost wear. I know that sounds kitschy of me, especially as a male, but hear me out.
One of the unique characteristics of fashion that Irina brings into her painting is the attention to, and expression of movement, as I said. A dress isn’t just good or bad because of what it covers or shows, but how it hangs, how it moves, so on. But something to remember about real creativity is, put simply, connecting two ideas which are uncommonly connected. In this example, those elements are petals and fabric, and the paintings she creates may make you rethink what you know about both.
A flower is never just a flower, a color is never just one color, and an image doesn’t have to be still because paint can be made to dance. If you get a chance to visit her at Art! Vancouver this year, and there’s a man at her display tapping his feet, that would probably be me. Come dance with us.