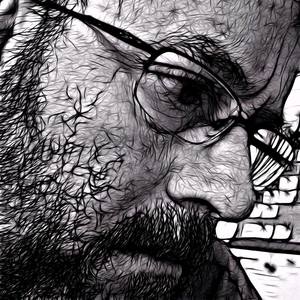 My work is a synthesis of the intricate, chaotic, and unpredictable. I work primarily in digital media, focusing on colorful abstracts, complex fractal manipulations, and digital photography, with brief incursions into traditional media such as acrylic on various supports. I work with shapes, colors and textures in an attempt to reach something greater than the sum of those parts.

Most of my work is non-objective pure abstract and I delve into the world of the expressionist, minimalist, and pure color field. Some of my work is meant to be playful, colorful, and childlike. I explore relationships between organic forms, crisp edges, and vivid colors.

I see the world as a struggle between the "thinking" and "feeling" parts of the mind, each becoming more or less dominant over time, and I endeavor to appeal to both in my work. ï»¿I touch on themes such as the mystical, mundane, esoteric, vulgar, and philosophical.

I was born in Waterloo, Iowa and grew up in surrounding communities. I studied Art at the University of Northern Iowa, in Cedar Falls. Much of the past 45 years have been spent living and working in the upper Midwest of the United States including Iowa, Minnesota, Wisconsin, Michigan, and Illinois where I currently reside in Springfield.