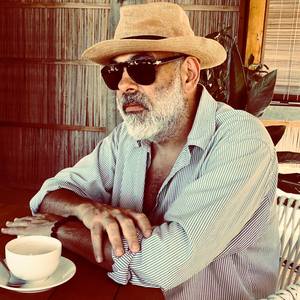 If my work can sometimes be disturbing for "pictorially correct" amateurs and requires of the one who takes the time to observe it that it makes one, see two steps forward to discover in each of the funny or tragic details the universe that is mine,

I confess, I try to get rid of the imitative constraint of painting, but rather to use pure and bright colors, not to hesitate to exaggerate my visions, and to give my paintings its own decorative and symbolic logic.

Jean-Paul Debout was born on June the 19th 1966 in Neuilly-sur-seine, France. Born from artists family, he practiced during his teens a lot of small as well as more steady jobs that led him to live and acquire many different human and artistic experiences in France and abroad (USA,Brazil...). After studiying architecture at the Académie Charpentier in Paris, he held one of his first exhibitions at the "Salon Gérard Molière" in Samois-sur-Seine, exhibition rewarded by the Prix du Conseil Général (2004).
When still a child, Jean-Paul had done a lot of drawing whith pencils, felt pens and ball points, but he did not start practising "real" painting before the mid-90s. In 2002, he decided to become a full time painter. His first exhibition as such was held in a Parisian gallery in June 2006.
The works exhibited at the Médiart Gallery are mostly dedicated to Manhat- tan, the artist expressing both the many different impressions he felt while living in that metropolis and the unescapable presence of its skycrapers.
He fills in the whole available space of the canvas in order to transmit the density of the local architecture. In tune with the city, he re-builds a new universe based on his own experience and vision.
The skycrapers vibrate to the rhythm of a music (Broadway's, in this case) always prominent in Jean- Paul's work as well as the movement of his most familiar surrounding: the sea--a boat and a lighthouse suddenly appear in a corner of a painting titled "Man Hattan" ( a pun with "attends", meaning "wait" in French).
The artist is equally fascinated by cultural intercourse: Chinatown with its calligraphies and the flight of its pagoda's roofs towards the sky; a veiled reference to the real world and perhaps a dream of peace between nations in the painting "Mosquée City" where the buildings'roofs are sometimes domes. Jean-Paul Debout's paintings are slices of life, fed with the day to day little pleasures ------ buildings turning to cigars or bottles of wine.
There are no limits to that creative fever, and it will be no surprise to learn that Jean-Paul Debout is a dedicated admirer of the dada'sts way to insufflate anti-establishment and winds of freedom into their works. Like his elders, he likes to play with words and the titles of his paintings are often puns that he writes on the canvas itself.
Let's be seduced by the life that exsudes from the work of this young artist to whom we wish a bright future.
Sine the very first day of his life, Jean-Paul has grown up in an all-musical atmosphere. The roots of his vivid and full of rhythm painting are probably to be found in that background.