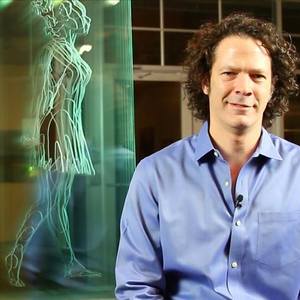 After graduating with a bachelor's of arts degree (math and computer science) from the University of Colorado at Boulder, Jed Malitz pursued a career in biotechnology information systems (IT) for the next 25 years.

In 2009 Malitz first dreamed of ethereal human forms made of floating ribbons. In 2011, Malitz ended his IT career and dedicated himself to creating these forms. He completed building the first glass sculptures in 2012.

In his most recent work, Malitz completed the first ever depiction of The Crucifixion in large-scale sculptural glass, utilizing light itself to depict Christ.

BA (Math and Computer Science) from the University of Colorado at Boulder.