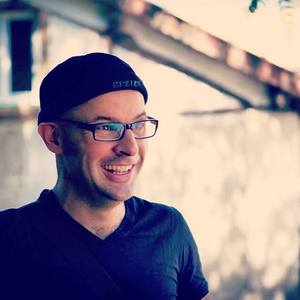 Creative Process:
Painting is one of my forms of meditation.
When I paint I’m fully aware of the present moment.
I constantly want to create, it’s like discovering something new each time.
Sometimes I need movement and therefore work more on the movement of my brush.
Sometimes I feel a need to mix colours, or work on a sensation, a feeling. Inspiration can come from:
• a model that calls me by her beauty, her attitude, her eyes ... and then I integrate it into
an unexpected world.
• Or conversely begin work on colors or textures and see a face appear.
I work a lot on feeling, it’s like a craving for chocolate. The idea comes and never leaves me. I don’t fight it, I don’t expect anything. When the time is right, I enjoy it until I am full and fulfilled. I’m guided by accepting what comes to me without really taking control.
My leitmotiv is to transform reality, combine figurative and abstract.
For me humanity and its environment are one, we belong to the universe and it belongs to us, so I try to create works by “merging” the subject and the background.
I always represent stillness and movement. Immobility being represented by the posture of my subject, movement through the dripping technique.
I wish to awaken your emotions; the stillness of Zen and the rush of movement, the harmony of colour and the unity of the subject and his world.

Biography:
From an early age, Jerome Royer has always had a knack for art. At school, whether it was just a doodle on a notepad or a full-blown project in art-class, students and teaches often praised him for his natural skill. But to Jerome, art was never anything worth pursuing. It was an amusing hobby, but nothing that would take him anywhere in life. Little did he know how much of an impact this natural talent would have on his life.

As a young adult, Jerome continued his studies in hopes of becoming an architect. Despite his final exam's result which urged him to become an artist, he took the more practical path and eventually found what he thought was his dream job, designing buildings.

It wasn't until he was 38 that Jerome decided to immerse himself in art. He began to post his doodles and caricatures on his instagram page, and surprisingly received positive feedback from not just his friends, but strangers from all over the world. These compliments gave him the confidence to continue creating and try different techniques with his art. It was soon enough that Jerome, with absolutely no previous experience in painting, decided to try watercolor for the first time and instantly fell in love. Since then, Jerome has tried many different styles of art but his passion will always lie with watercolor.
"We will have the fate we have deserved it." - Albert Einstein

Jerome is a strong believer in fate. In retrospect, every hardship he experienced was just a sign pointing him in the right direction. All along, deep down he knew he was destined to be an artist.

Martial arts, specifically aikido and tai chi chuan, have been very important in his artistic development. He wields his brush with a steady hand and uses the movement and energy to bring his paintings to life. He throws the paint to dry movement, he slid his brush to the canvas with light, he listens to his heart.

His faith in humanity leads him to put man at the center of his work. His works are figurative and abstract mix. His philosophy is that art requires the balance of Ying and Yang.