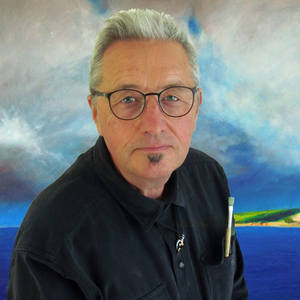 John Wright, born London 1952.
He studied art at Watford School of Art, in the UK in the early 1970s. Like many other art school students, he spent much of the time making music in bands, which he continued after leaving Watford. Lecturers at Watford while John studied included Mark Boyle, Peter Schmidt and Brian Eno.

To keep a roof over his head, a career in graphic design helped fund the musical ambition. Having worked in advertising agencies in the UK and Australia, John now concentrates on painting, having moved to North Devon.

John continues to be inspired by music, landscape and flowers, which form the core of his current work.