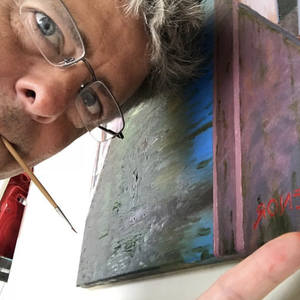 John is a Professional Photographer who is based out of Los Angeles, CA. Having been trained in all aspects of Film Photography in the 90's, where he won the "Most Outstanding Photographer" award his last year at University, he has never really wandered too far away from his film roots and his style and methods reflect that education. Currently, he works on TV shows and Movies, the images he creates of famous Actors have been seen all around the world and featured in numerous Ad Campaigns. Apart from his daily work, he considers his "Street Photography" imagery to be his true passion when it comes to his own "pure Photography." These are the Images he has chosen to feature here. One of the Series of Street Photos led him to a Journey into the lives of Homeless People Who Have Pets, which turned into multiple Solo and Group Gallery showings in and around Los Angeles. John is always hunting for that "next" shot.
----
With a background in Architecture/Design and Illustration, part of John's Education was in Oil Painting, a medium he instantly fell in love with at University. He has had a couple of start and stops over the years, but is now back in the "studio" whenever he can carve-out the time. John jokingly describes his Oil Paintings as, "Cheaper than going to therapy", and has been re-mused, painting with the passion he had when he first discovered the world of painting. His style has been described and "heavily Impressionistic" and it is something he takes great pride and joy in hearing.

BFA Illustration/Minor Photography (Photography was not a Major at the time) at the renowned Ringling School of Art and Design (now Ringling College of Art and Design) -- Studies in Architecture and a Minor in Design from Mississippi State University -- Member International Cinematographers Guild, Local 600 Hollywood, CA