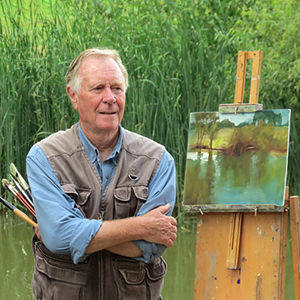 John's love for art began in England at a very early age as he discovered the great satisfaction derived from his ability to draw and paint. His family moved to Canada when he was 11 years old where he continued developing his artistic skills eventually became an art major at H.B. Beal Tech. in London, Ontario with subsequent studies at O.C.A.D. in Toronto.
John started his artistic career as a designer/ illustrator and after winning an international design award in his field he was recruited by a large design company in Chicago where he and his wife and family lived until moving back to Toronto where he
began a successful career as an architectural illustrator. John worked with some of the World's leading Architects and developers and achieved recognition in that field with “Best of the Eighties” award for his work on the World Financial Centre in New York City.
John’s ongoing passion for landscape painting was deeply influenced by many artists including Richard Schmid who’s work he was introduced to while in Chicago in the 60’s.

John currently lives in Victoria B.C. and divides his time between painting en plein-air, in the studio and sharing his artistic skills through workshops across Canada.

"The quest for eloquence in my painting is continuous. Strong design elements, an appropriately chosen colour palette, spontaneous brush work and underlying luminosity are key elements that allow me to share with others what I see and feel."

A playwright once wrote: “Without doubt, beauty is to be found everywhere, but it takes an artist to see it and understand it.”
Artist’s Statement.
A painting should have substance that creates an emotional response, make a statement or give rise to thought and conversation.
I appreciate all forms of art whether decorative, non-objective or representational. My preference is to use my artistic skills to bring an awareness of the beauty that surrounds us and the environment that we take for granted.
I paint only subjects or experiences that I have personally encountered and strive to share the emotions that I feel about the subject as eloquently and creatively as possible.
“ My goal is to share with others what my eyes see, my heart feels and my soul yearns to understand”