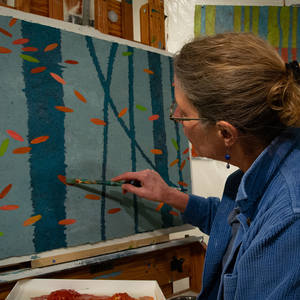 Katherine Steichen Rosing’s paintings and drawings have been exhibited in solo and group exhibitions in museums and galleries throughout the United States and abroad, including Milwaukee, Chicago, New York, Washington D.C., Tokyo, and Beijing. Her works are included in numerous collections internationally.

In addition to an active exhibition career, Ms. Rosing has taught studio art courses at colleges and universities for over 20 years in Madison and Chicago. Born and raised in Appleton, Wisconsin, she earned her undergraduate degree from the University of Wisconsin-Madison, and an MFA in Painting and Drawing from Northern Illinois University—DeKalb in 1992.

"I crave the peace and solitude that I find in nature -- interludes amidst the cacophony of life. In my paintings, I strive to conjure the mystery, saturated calm and deep reflection I experience when spending time in forests, and peering into lakes and ponds. My paintings spring from accumulated memories of forests and lakes.

I work on the edge of abstraction, teetering back and forth, blurring the line between image and meaning. Paring an image to its essence clarifies and distills the ideas like a meditation on change and interaction. Observing change and interaction in “natural” environments has a way of deepening understanding of the transformative passages in our lives.

I am driven by texture, color, and negative space. My painting process usually begins with the creation of a relief surface, using acrylic gel mediums to form a textured foundation on birch panel, suggesting bark texture or ripples on water. This initial texture is followed by many layers of paint to form subtle relationships between texture, color and light."

SWEPT AWAY
September 10 - December 1, 2019
Overture Center for the Arts, Gallery I
Madison, WI

Work in this two-person exhibition explores the impact of climate change on our forests.

Two of my scroll drawings of ash trees are included in this group exhibition of wood sculpture made with ash lumber reclaimed from trees destroyed by the emerald ash borer.

Emeralds to Ashes, Solo
Truax Gallery, Madison College, Madison, Wisconsin (Funded in part by a grant from the Madison Arts Commission and the Wisconsin Arts Board)
November 2018

In Omni Terra: of the Earth, (with Gustavo Flores) Gallery Marzen
Madison, WI
2016