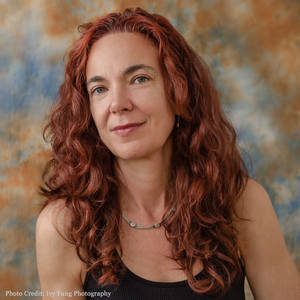 Kristen Sard is an artist, professional photographer, and retoucher. Born and raised in New York City, she attended Parson's School of Design and received a BFA in photography. She has exhibited her work in galleries both in New York and San Francisco.

Strongly influenced by both growing up in Manhattan and escaping to the countryside, elements of dance, theater, fantasy and nature are components in her work.

Kristen connected with photography when she learned how to break the rules and make it her own unique medium. While attending Parson’s School of Design, She wanted to create pictures that were theatrical, figurative, had a sense of movement, and depth. She started out by experimenting with non traditional photography techniques such as painting with developer, using a Diana camera, or light painting. In the confines of her studio, she mostly photographed self portraits with body makeup. Theatrical makeup offered a way to explore a part of oneself that was normally not seen. Searching for enhanced movement within her pictures, she began photographing reflections off of wine glasses, or anything that changed ones point of view of the subject. Finally, she found a surface that was more sophisticated and mesmerizing to capture reflections from. It gave her pictures a sense of freedom and allowed her to connect her photography to her love of dance, water, and the unknowing.

Mesmerized by the search of photographing unpredictable moments, Kristen continues to photograph the reflections of models. She taps into memories of mysterious woodland walks, wide open grassy fields, dancing freely, or floating in water. The hand made sets the models stand within, range from complex to basic. Within every image, Kristen tries to maintain a feeling of openness in her work. So that the inner spirit of the model can shine thru.