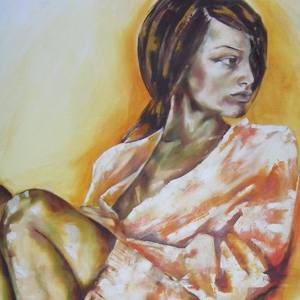 Laura Roncalli is an artist who lives and works in Bergamo.
She studied to get an artistic education, first at the Andrea Fantoni art school in Bergamo where she now works as a teacher since 2001 then at the Brera Academy in Bergamo where she earned a Laura's academic degree and a specialization in teaching in pictorial disciplines.

At the Lyceum, she deals with the management of the department of artistic subjects, competitions, projects and reports with the territory. She deepens her path as an artist parallel to her teaching and that of mother. She conducts her artistic research by carving out spaces between all the related activities because she has decided to dedicate herself to her children.

Now that the children have grown and show particular appreciation for the mother's activity and attitudes artistic, she decided to devote herself more regularly to painting and to a personal exhibition to be held in May 2017 in Bergamo at the Fantoni's Hub, a former Manzù's room.

It's me ... I'm in every nuance, every nervous gesture at every brushstroke just mentioned.
My style is figurative of an intimate tendency.
My artistic research is focused on the female figure and role as an excuse to investigate my sensibility as a woman.
I am interested in the body because it represents "the point of contact between what appears externally and the feelings, the emotional impulses that act in the soul".
My figures are women, mothers permeated by an apparent calm betrayed by the melancholy looks and the half-open mouths that reveal an underground anxiety for the resigned wait.
The various colors are combined in a wide range of bright and vivid tones. Sometimes the colors are consistent and nervous, alternating with surfaces treated with glazes that allow the white canvas to be glimpsed, as if to re-propose the link between matter and feeling. The background is never considered because it would distract attention from gestures, body expressions, facial expressions and looks that reveal the intimate expression of the subject in question, in an attitude that veils feelings and emotions.