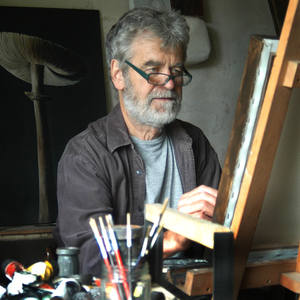 In the early 1970’s I trained as a black & white photographic hand printer at Vogue Magazine Studios printing for the fashion photographers of the day.

Later I became a freelance photographer and had regular clients of my own such as Capital Radio and Laura Ashley etc. I also set up a silkscreen printing and laminating workshop in Soho.

In the early 1990’s I moved to Somerset and was able to concentrate on painting. During this time I exhibited at a number of local galleries as well as shows such as The Country Living Fair and the Affordable Art Show.

2009 saw me move to Cornwall where I have renovated a listed mill with my wife. Since living here I have been showing my work in St Ives and Penzance.