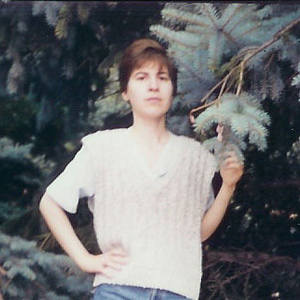 My works can be divided into three main categories:

Human forms, their interaction, linear transformations of the objects, rhythmic play of construction - these are the main features of my work.

In those compositions I used line as a minimalistic mean for delivering my thoughts and vision.

"Red flowers", "Crooked street", "Green construction" are examples of my oil paintings, which are also based on human forms. Other works are abstract or semi-abstract; the examples are "Composition 6", "Composition 7", "Composition 14". In these works I try to deliver light, space and color.

This body of work is a natural continuation of my line-works. In 2006, I began applying digital effects to my drawings. The idea was to enrich simple line and make it look more complex, thus through that complexity create a new kind of form.

The examples of this body of work are "Untitled", "Lovers", "Autumn lovers".