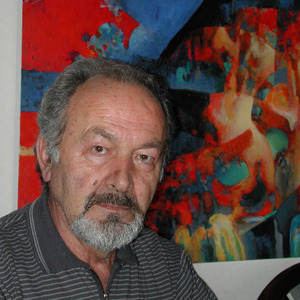 Drago Došen, was born in former Yugoslavia (Bosnia) in 1943 and died in New Zealand in 2019. He dedicated himself to the art at his early age in which he showed a great talent. Upon the graduation from the Art High School in Sarajevo, he continued his studies in Belgrade where he graduated from the Academy of the Applied Arts in 1970. Drago Došen concepts link him to the early 1970s generation of Belgrade painters who turned toward a fundamental experiencing of nature, reinstating the subject theme in their paintings. In 1975, Drago started exhibiting his work, which resulted in the great interest throughout Yugoslavia and Europe. It didn't take long before his paintings enjoyed great critiques and reviews from his fellow artist and the general public. This made him one of the most recognizable artists on the home soil at the time. Throughout 20 years of exhibiting in a number of galleries in many countries, Drago managed to sell well over 400 paintings that went to private and public collections. In 1995 Drago moved to New Zealand where he continued to exhibit his work until 2010, looking for new challenges and aspirations. His most recent work was inspired by the new surroundings which brings different flavor to his extensive portfolio.
He died in Auckland in 2019.
Došen's painting is conceived in the subconscious of perception, more in the sphere of obscure recollections than in clearly-defined forms of reality. He develops the perception rather than accepting it as it is, and so the form on his painting seems to be a late coming recognition of something once known but forgotten, something once loved but lost. His scenes take on the allure of a fanciful fabric of forms which reveals the intimate meaning of nature. Remaining faithful to the shape of the subject, Došen defines it through the color value of form, thus achieving a calm but fluid and poetically-expressed atmosphere, an ambient of surrealistic space in which light lavishly showers the subject. Then the temporal element insinuates itself into the scope of the artist's imagination, flowing backwards from the present to the past in an introverted, nostalgic quest for the former life of the painting. More than being emotional or visual, this is truly a return to the spirit, to the spiritual; it is a search for the long-lost experiencing of the "painting", whose illusion now becomes reality. Remembrance or, more precisely, preconsciousness is transformed into a painting, the the object of our observation, but this again has a twofold approach, pure image and symbol. Symbolism, however, is the backdrop of Došen's paintings. The artist's imagination turns the perceivable into the poetic haze of the painting, into the form and content of a new reality in artistic awareness.