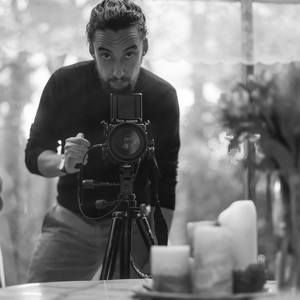 Ever since I can remember, I was determined to become an actor. I think my mother's love for classical Soviet melodramas during my upbringing played a big role in developing my passion for acting. I memorized lines from favorite movies, and spent hours performing in front of my mom in the kitchen.
Later, acting became my profession. In 2014 I graduated from the Belarussian State Academy of Arts and spent next four years with Janka Kupala National Theatre in Minsk, working as an actor.
I believe the ability to observe is one of the most important skills you can gain from acting classes. You watch people: how they move, express their feelings and emotions, what their habits are. I’m pretty sure that is what led me towards photography.

It seems I was drawn to photography spontaneously. My father gave me his Zenit-E, a legendary Soviet 35-mm camera, when I was 17. I started capturing and developing my own photographs. Classic film photography became my hobby and my passion, and later on developed into my career.

I like to use film. Working with an analog machine is like zen meditation; it’s an intuitive process that requires a lot of patience. I take a long time to look through the matte glass of my Mamiya camera to find the right angle. I want the portrait to be unique and honest at the same time. Good photography requires attention to detail, silence and time.

Darkroom is the next step of the process. It allows for another layer of creative input, where I use gelatin silver printing technique to preserve the genuine quality of my photos.

I photograph everything that touches my heart and resonates with me. I believe every detail of this world is important; everything has its own value and significance. Honestly, I get lucky sometimes: I look through the camera and suddenly everything works out!