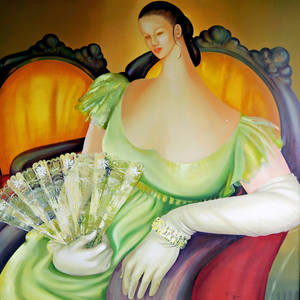 Miriam is currently being represented by Demian Feldman. His email is his name as one word at yahoo dot com. Miriam Alba Romano was born in the city of Rosario, Argentina, lived half of her life in the United States, and is now back in Argentina creating art. She lived in Los Angeles for 15 years and studied art at 'La Universidad de Humanidades y Letras de Rosario' receiving a master's degree in 'National Professor of Drawing and Fine Arts.' Her teachers included Miguel Ballesteros, Luis Ramoneda, Hugo Ottmann, and Pedro Sivori. Miriam has been an artist as far back as she can remember and always considered herself an artist since her earliest memories. It has been and continues to be an unstoppable and incessant activity in her life. What is contemporary art? Whoever creates art is always a contemporary of their own time. In her own words, 'my art is a voyage where the communication of souls is what best describes the essence of that voyage. Art has been a ship, a weapon, a medicine, and a flag in this nation of our universe. Now it is.' Her first exhibition, at the 'club español' in Rosario began when she first started studying art at the University. She has had the privilege of exhibiting her work at the Bacardi Gallery in Miami, next to Colombian artist, Fernando Botero. She has also studied under the great American artist from Fresno, California, Mark Rodriguez and continues to study under the renowned, Miguel Ballesteros.
She has obtained awards and recognitions in the states of Pennsylvania, Florida, and California and also in Firmat, Rosario, and Buenos Aires in Argentina. She is now working in her studio in Roldan, Santa Fe and continues to produce new work. Miriam desires that her artwork to speak for itself.

1982 Workshop for the utilization of resin polyester for sculpture Faculty of Humanities and Arts; Rosario, Argentina.

1978 Selected finalist in plastics in the USA at the studies of WPBT Cultural Channel 2; Miami, FL.

1979 First prize in drawing category. Best of the show an purchase award for the private collection of Art League; Hanford, CA.

1981 Collective Exhibition at the XLVLL Museum of Art Juan B. Castagnino; Rosario, Argentina.

1990 Pastel work demonstration in the Celebration of the Arts; Fresno, CA.

1991 Finalist and first place award winning artist at the Celebration of the Arts; Fresno, CA.

1991 First Prize and best of the Show in paint category at the Civic Auditorium of Hanford, organized by the Art Center; Hanford, CA.

1992 Finalist and first place award winning artist at the Celebration of the Arts; Fresno, CA.

1988-1990 Lead artist of the Arts Correctional Department in the Avenal State Prison. UCLA extension, Artsearch. Developed a program for the inmate population where they could express themselves in the visual arts, music, writing, and performing. It was a unique experience that was challenging, not only my skills as an art educator, but also my skills as a manager. I had to build the program from the ground up and today university students from the area visit the permanent exhibitions.

1991-1993 Member of the directive board of Tulare Kings Regional Arts Council.

1991-1993 Teacher for kids in the Kings Art Center in Hanford, CA. The art center was opened in 1991 in an attempt to bring the creative arts to the children of the community.

1993-1995 Contract Artist for DFZ (Drug Free Zone), a state program at Roosevelt High School in Fresno, CA. The program was created to prevent the increase of drugs and crime in adolescents.

1995-1996 Opened a studio at the artist’s floor of TW Patterson building in Fresno, CA.

1997-1998 Illustrator at Liberty Bell Productions. Illustrated a children’s story “Wingless Angel” which is in the process of being published.

1967 Gallery of the Spanish Club, Rosario