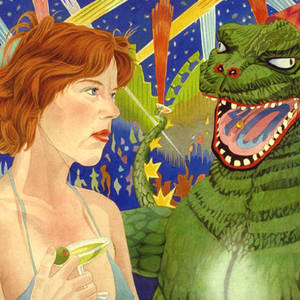 When not obsessively painting my dog, social commentary and current events presented in a historical context form the core of my work. I have studied Asian art for four decades, in the US and Japan. I create scrolls and triptychs about issues confronting society today. Recent series include 'hell scrolls' based on late Heian Period (12th century) Japanese Buddhist scrolls about political and environmental conditions, and an update of Japan's haunting folklore, "Night Parade of One Hundred Demons".

2017 "The Art of Getting There: Artistry in Trains", Pasadena Museum of History, Pasadena CA, April 2017