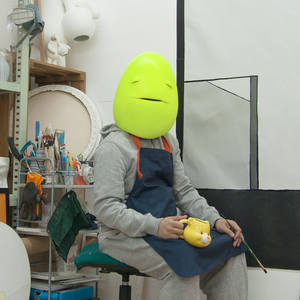 mr clement is the artistic pseudonym for my work as a sculptor and painter.

My practice often draws inspiration from comics and popular culture however I like playing with paradox and often approach my narrative sculptures and paintings through the lens of the Old Masters.

I enjoy finding small and interesting compositional elements in classical art but use a more direct way to express these elements, defined by my own minimalist aesthetic and humour. I have developed this approach as I feel it speaks to my main audience which has grown up with pop music, fast food, comics, TV and similar forms of visual entertainment.

The process of discovering recurring themes and hidden meanings in classical artworks not only gives me a new and profound contact with those works of art, Old Masters and even the bygone eras, it also helps extend my imagination, and enriches the stories and personalities of my characters.

I want my artwork to communicate complex emotions purely based on their form, without dependence on captions or titles. In my works, there are many allegorical characters in the form of cartoons – my main character LAPIN is a melancholic seeker, which is sometimes depicted through figurative dramatisation. This technique is enriched from my study of classical art, such as how a woman rests her hand across her chest or tilts her head in a Raphael portrait to depict a certain sensibility.

I believe having a romantically playful layer in the narrative makes my work special. I like the idea of subverting the boundary between contemporary art and classical art, and creating paradoxes through giving the original work of art new contexts and meanings.