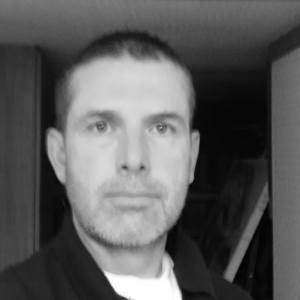 I like a simple city skyline, although I am a simple country born soul at heart. Therefore I do tend to aim for a highly ambiguous tone. And the subject is mostly city vs country. Which is an analogy for the impact of humanity both on itself and of its surroundings. This is portrayed by the use of flowers or animals in the city or, line, shadow and light. In fact my larger works are becoming more and more linear, more ambiguous with the light and shade, and perhaps a bit more humourous. I like to have an element of naughtiness, perhaps, or surprise.


I was a keen artist as a boy (somewhere in the middle of Africa... ) and teen, but studied for a BA in Architecture at the University of Brighton and graduated in 2001. Being a farm boy however I was fascinated by the vibrancy of the city of London and the art scene in Brighton and instead of becoming an architect pursued art instead. I'm a voyeur of life, although often just watch from the sidelines, never really fitting in yet often included. I'm excited by bright light, new things, things that other people fail to see, quiet things, rolling fields, expansive skyscrapers and the way they fall into complete silence after the working day is done, airports and harbours, and am easily led down new exciting paths. However The City juxtaposed against the countryside remain a fixation, a reflection of a country boy who was seduced by the city.

There is an alternative philosophical thread that also runs through my work, the subject of childhood influences on the adult. So whilst some of my subjects may seem 'childish' the subtext is the loss of innocence.