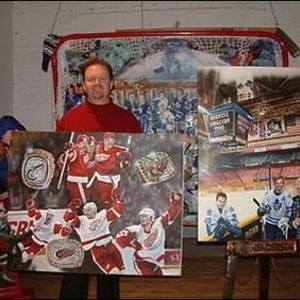 Murray was born in Toronto in 1968. He began displaying artistic abilities at a very young age. When he was in grade one, Murray was assessed at a grade eight level for artistic ability. In grade Four he entered the art competition at the CNE and received first prize. By grade six he designed the school logo for his school, which still appears on that school's crest today.

Murray later moved to Calgary Alberta and while in high school, he produced and marketed a limited edition print of John Lennon, which he sold world wide.

As a self- taught artist, Murray has enjoyed exceptional success with his wildlife paintings, generating millions of dollars for such charities as Ducks Unlimited, and Ontario Federation of Anglers and Hunters , Childhood Cancer Foundation Canada, and Sick Kids Hospital Toronto , Murray now finds his work leaning towards personal interest pieces, mostly with a hockey theme. He did a print to help generate funds for the NHL's Hockey Fights Cancer charity and another with the Detroit Red Wings "GRIND LINE" with many more hockey themed paintings in the works including one with Wayne Gretzky .

Among his many exceptional artistic skills are his ability to capture facial expressions in his character pieces. Rich in detail, his paintings have a compelling draw.

On February 8 2007 his daughter was diagnosed with cancer ,"I now have a very personal connection with all of the charities that I have helped in the past ,because now I’ve lived the freighting and tragic consequences of this horrible sickness" . She passed away on August 7 2009 .
"I now give a portion of every piece of my art sold to Childhood Cancer . "

Childhood Cancer Cradle for the cure