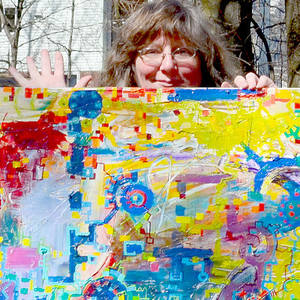 I am offering a selection of Abstracts and abstracted Science theme work on Saatchi. Please search for me online for my Landscape and Tree of Life bodies of work.

I often ask myself whether I'm a physical scientist who also paints, or a painter who has studied a bit too much physics and chemistry. Physics and Chemistry have become a big part of how I model and understand the world. I approach paint texture in terms of it's viscoelastic properties, and color in terms of pigments and their spectra. If you take a cadmium inorganic red and it's organic substitute, gently tweak them so they look almost identical in indirect daylight, will they behave differently in incandescent light? Sunlight? Late afternoon light? (controlled lab light?)

Unlike people, fruit, landscapes and other traditional painting subjects, technical ideas and objects don't have an "appearance" in any normal sense of imagery. They're imagined and depicted as visual ideas that guide us through complex phenomena. For example what do like bonds in molecules really look like? Or the quantum not-quite-existence of high vacuum-spawned subatomic particles? The softly dancing dynamic structures in complex fluids? What about "things" that are too small and too delicate for even the best electron microscopes (TEM - SEMs are toys)? I've found that many images scientists create serve as visual similes to data and hypotheses, and as visual metaphors for complex and often highly abstract concepts. These metaphors and their stylized interpretation inspire and guide my "abstract" work.

Dr. Valluzzi has shown in several juried exhibitions, and her work is included in private collections in the US, UK, Japan, the Netherlands, Switzerland, Bulgaria, and Malta.