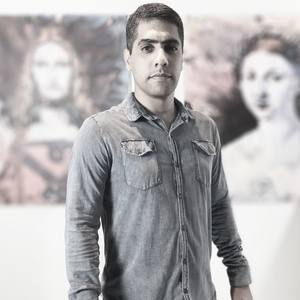 Since he was very young, Neto showed great aptitude for visual expression in his early years. In the early grades in school, he already demonstrated a differentiated ability to recognize and reproduce shapes and figures. Always very introverted, his favorite toys were always pencils and paper with which he spent hours and could thus translate and express, better than by any other way, his imagination, his inner universe and his ideas. And then, around 13 years old, he decided to learn the techniques to improve his drawing.

Later, however, because he did not believe that his art could become his profession, he left this passion aside and ended up becoming a military man, graduated in Systems Analysis and specialized in an MBA.

His need to express himself through visual language, however, remained always latent until, after years of incompleteness, he could no longer suppress his creative impulse and went back to drawing and decided to learn to paint.

Self-taught, his acrylic technique can be classified as realistic with regard to proportions, but he is quite expressionist in relation to the application of the paint on the support and the colors that are used subjectively, since these are not predefined in a specific palette, but chosen spontaneously during the execution of the work.