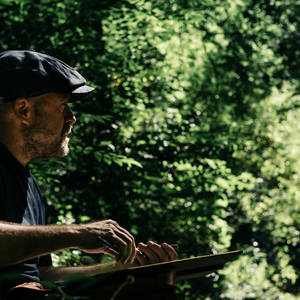 A visit to Northumberland in the early 90’s came like a thunder bolt of inspiration resulting in annual art pilgrimages as the furrowed horizons and huge skies, the mystery of woodlands and solitary trees are key to firing my imagination. I strive to record the rugged terrain of the countryside in my landscapes whilst allowing a looseness in my style to give my paintings an energy.

I Developed my style through observing the countryside while walking, forging emotional connections with the land recording the balance of quiet spaces mixed with frenetic energy. This is reflected in my mark making in a signature ‘impasto’ interaction of paint on canvas or hard board, with a fluid use of vibrant colour - balanced with a more studied, graphic mark making for my charcoal drawings.

One of my commissions caught the eye of TV’s Kate Humble. As a result, I was interviewed as an inspiration for her “Thinking On My Feet” book (published in 2018 by Octopus Publishing Group). This in turn led to Kate inviting me to create the book front cover, end papers and inside plates.

Into The Frame — A synthetic interaction
Jan. 29, 2014 - Feb. 5, 2014
Venue: Red Gallery, 1 - 3 Rivington Street London EC2A 3DT
“Into the Frame” is a synesthetic installation which invites you to explore and feel (by touching and listening) a completely new creative 3D dimension, based on one of my paintings - "Wave".

Watch A Video About Paul West