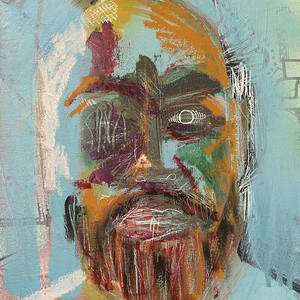 Peter Charalambides is a visual artist living and working in London, England.

Peter works in a variety of mediums including spray and acrylic paint, oil sticks, collage and pen. Pieces are characterised by colour and texture- qualities that magnify an expressionist style throughout his works.

Politics, consumerism, the media and femininity are all themes that are central to Peter’s work. These concepts are often laced with irony and humour; approaches that quietly act to accentuate these all too real and pervasive issues.

Focusing on subjects that are contemporary and relevant, Peter’s work has explored areas such as the portrayal of femininity in the media, British Politics and the worldwide pandemic. Through his approach to such issues, Peter’s principle aim is to highlight the often absurd and overlooked peculiarities that exist in today’s world.

Peter Charalambides is a working artist and has sold artworks to patrons around the world. His work has appeared in numerous exhibitions in the U.K and appeared in several publications.

Peter has also donated several of his drawings to local causes, which have subsequently been used in merchandising and other charitable fund raising activities.