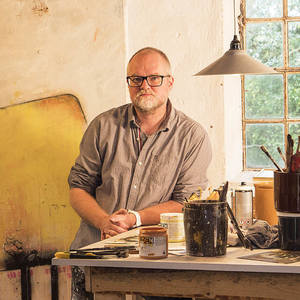 Lars Pryds is a visual artist and designer, working with fine art and graphic design from his studio Tolstrup Pryds Graphics, which he shares since 1987 with his wife, designer and art critic Lisbeth Tolstrup (see tolstruppryds.com).


Lars Pryds' artwork consists of primarily paintings and collages, created with inspiration from the atmosphere of the big cities but also including graphic elements from the media.


His work is documented in a 160-page book, "Pages of a Non-Existent Diary", in English and Danish, published 2012. He is represented by Galleri Art For Future, Valby/Copenhagen (DK), and Galleri Pagter, Kolding (DK).


As an editorial art director and graphic designer, Pryds has more than 25 years of experience from Denmark's largest newspapers, as well as from assignments from his own studio - e.g. books, posters, and identity design. He has won several international awards for editorial and web design.


Pryds holds a Master in Design from The Royal Danish Academy of Fine Arts, Schools of Architecture, Design and Conservation, June 2013. Before that he graduated from the School of Arts and Crafts (now: Design School Kolding) in 1987, majoring in drawing and graphics.


In his spare time he is the editor-in-chief of SNDS Magazine, writes art reviews for the Danish art magazine Kunstavisen and designs funny fonts, which are up for sale from market leading font resellers (see pryds.com/type).

Since the mid-1980ies, Lars Pryds has exhibited in numerous solo-, group-, and juried exhibitions in galleries, museums and others in Denmark and abroad. For a full list of exhibitions, please visit pryds.com/cv