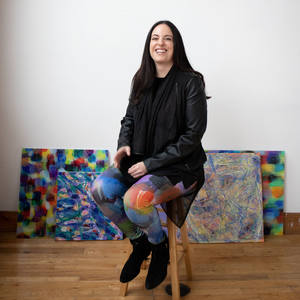 I'm a Toronto artist and former lawyer who has studied and worked in the US, France, Italy and Hong Kong. In 2008, I left practicing law to study painting full-time in New York City. My artwork has been shown in solo and group shows in Washington, DC, New York City, Venice, Italy, and the Toronto area.

I’m a member of CARFAC Ontario and Artists Network in Toronto.

My original paintings and artwork are currently on view on the main floor of the Hilton Toronto/Markham Suites Conference Centre & Spa and the Cotton Spa Boutique in Toronto. My original brain sculpture is on view in downtown Toronto.