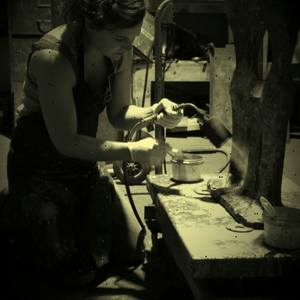 Nature is the sublime being that dictates our world. It creates and destroys continually fighting to revert back to the primal landscape it once was.
Seen in the aftermath of volcanic eruptions, to the pavement cracks beneath our feet, corroding cliff faces and oxidizing metals. Whether natural or man-made, exposed surfaces are governed by the elements.
Natures paintbrush exercises its techniques, attacking surfaces irrespective of composition and structure. The elements take control stripping back a compounds surface makeup, to an ever changing canvas of metaphoric shapes.
Using a series of multi-media layers, oils and binding resins enables a creation of infused layers. And intricate compositions providing a wealth of textural explorations which express the aesthetics of my inspiration.
Art Career
I've had over 12 year's extensive and diverse experience in fine art. My sales over the last few years have been entirely generated though word of mouth advertising, each commission has led to another. I now feel its time to branch out to a wider audience, to hopefully increase sales and enable me to continue to experiment and develop my style.
The following exhibitions all resulted in a high level of sales and commissions.
July 2013 Islington Arts Festival London - June 2013 The Strand Gallery London.
Dec 2010 The Deafcat Rochester Kent - June 2010 ABSTRACTION New Arts centre Chatham Kent - August 2004 - August 2005 Ongoing display of works at Fuse Gallery Sandwich Kent July 2004 - Thanet Contemporary Art Festival, Margate Kent February 2004 - Visual Pluralism Gallery IOTA Ramsgate Kent June 2003 - Four Squared Gallery IOTA Ramsgate Kent April 2003 - The Second Coming