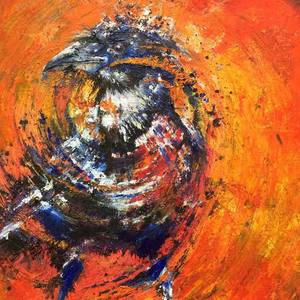 Wild, untamed nature. Rona Innes’s formative years in the sub arctic tundra of the Cairngorms is at the heart of her work. Her art captures the mischievous spirit animals inhabiting these landscapes as they pause to catch the viewer out.

Intricate drawings collide with semi-chaotic actions as fluids and powders are layered up with detailed pen and brush work, echoing the environment that these creatures live within.

2014 - State of Flux - An exhibition of new drawings.
The Parlour, Edinburgh

2013 - The Untamed - An exhibition of drawings, prints and paintings.
The Parlour, Edinburgh

2010 'Dream Home' - installation in a room of a home that was inserted into a public gallery, Phoenix Gallery, Brighton May Arts Festival

2009 'White Night Festival' Brighton,
'Future Machine' themed animations were mapped onto the architecture of the Unitarian Church during the White Night festival, with the Brighton Animators Network Group (BANG!)