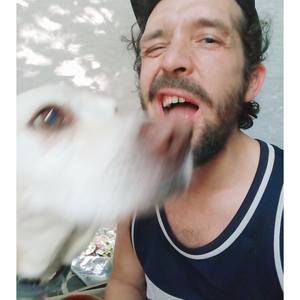 "Art as a means of loving"

Matthew child is a boy that one would say small, timid, gentle, curious, hypersensitive, amazed. Nature and the world of animals fascinate him. The world of humans is something else ... Its size, its fragility, its tendency to cry regularly, give it a "weak" attitude in the eyes of the outside world. As the opposites attract, he quickly discovers at his expense what it is to be strong. His nature does not allow him to defend himself and by dint of blows, he will say goodbye to the outside world to live in his inner world, his body.
He discovers that he is composed of skin, forms, thoughts, emotions, sensations, fluids, odors and noises. With this sensitivity, he is quickly disturbed, afraid of the intensity of his thoughts, he is uncomfortable with unpleasant sensations, and oppressed by the intensity of his emotions. The outside world seemed violent to him, but his inner world was just as violent. Then he starts to draw to forget everything. Life passes by, and by dint of being uncomfortable inside and out, he decides by his majority to go to the world of Alice in the land of Wonders. He is not afraid, he has nothing to lose and then discovers another place, in which the outside world and that of the interior becomes more pleasant. He discovers that one can enjoy exchanging with human beings, he is at last in peace and no longer want to leave this world so wonderful.
Alas, the intensity of the world that Matthew was trying to flee, knocked at the door to return. He decides not to listen but it strikes again, more insistent. Matthieu continues to try to escape the noise of the world, but this roar breaks the door of his inner space and pushes him back into reality, the fall is dizzying. The damage is estimated: Matthew loses two of his senses: smell and touch. He no longer feels anything, pleasure, or suffering. The drama is there and the envy is no longer there ...
However, a beautiful person will come to help him: his grandmother. A saint as one might say. She will love him, help him without judging him, talk to him about religion as a tool to accept and love his difference. A vision of spirituality so much more benevolent than in his Catholic schooling. His batteries recharged, Matthieu sets out again on the road, he wants to believe in the Miracle. At 24 years of age the 1st, occurs: It returns to the Beaux-Arts of Nancy. Art will allow her to begin to heal her wounds and accept, even love her body and reality. Through drawing and photography, he will find tools to transform what is too intense to endure in creation. Sewing, costume creation will allow him to heal his wounds, regenerate his skin and create armor. The DJ mix will allow it to reconnect to the Earth through rhythm, festivity and socialization. Associating Art with psychology, alternative medicine and spirituality will enable him to gain confidence in himself to accept the reality of his body and the reality of the world. Now that he is experiencing the inner and outer worlds with more wisdom, more benevolence and more love, he understands that to love oneself is not to be narcissistic or selfish but simply to accept oneself as One is, is to love one's difference.
His artistic work is finally a testimony of these stages of acceptance. He sees his hand as a seismograph that would retranscribe the vibrations of what he saw internally. Today he has had the chance to travel around Europe to make people dance during his costumed and musical performances. He has had the honor of sharing scenes with great artists like Jules Edouard Moustic, Hi It's Cool, Jacques ... These drawings were able to travel to collectors in New York, Los Angeles, Minneapolis, Brussels, Paris ...
It is therefore grateful that Matthieu is now working as an artist with passion.