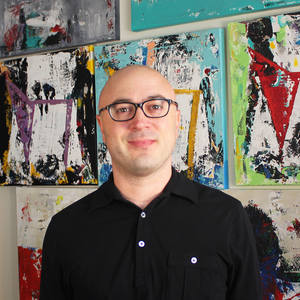 Shawn McNulty is a mid-career modern painter from Minneapolis who has become well-known for his signature textured abstract paintings composed of acrylic and pumice. He describes his work as “exploring the relationship between man-made structures and the natural world; the idea of recognizable shapes and structures living within irrational thoughts and emotions. Thick layers of acrylic and pumice and are applied, scraped off, reapplied, sliced off, etc.  There’s a technique I call ‘scuffling’ which involves a repetitive chopping motion with the palette knife resulting in approximate parallel lines.   There are usually little jagged characters that take form in the negative space that I call ‘skirmishes’ which become the kinetic energy of the piece.  The color fields interplay with each other, attempting to find common ground resulting in complex and interesting edges.  The process continues until a solution is found, always applying and mixing paint directly on the canvas, scraping away layers to reveal the ghostly characters of the previous.”

Gregory Scott, art critic at Minnesota Monthly, stated: “There’s something about Shawn McNulty’s color fields that won’t let you relax completely. A bit of rough play with the palette knife, and an otherwise calm pool of paint becomes a choppy sea. By scraping, slicing and reapplying, McNulty avoids the zone-out of traditional abstract landscapes, offering instead a more battered and complex meditation.”

McNulty has been a founding member of Rosalux Gallery since 2002, which is the longest running artist cooperative gallery in Minnesota. His work was used in a national M&Ms ad campaign, featured on the cover of the Southern Review (LSU), and recently featured in Tallulah Magazine which is published in England. His work has been featured in numerous Saatchi online collections, and can be found in private and corporate collections all over the world, and some notable ones include General Mills, UBS Financial, Langhorne Place Hotel (NYC), Midland Country Club, NFL quarterback Peyton Manning, and President Bill Clinton.