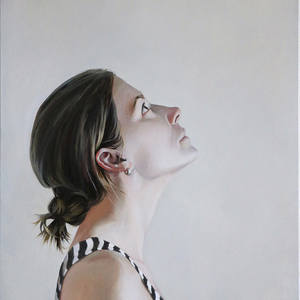 I was born in Moscow in 1987. I started my art education in 1998 at the Moscow State Academy Art Lyceum of The Russian Academy of Arts. I believe that a large part of my knowledge and skill was developed at the lyceum. The Surikov Art Institute was a logical progression of my academic training. I got admitted into the Faculty of Painting and after my 2nd year, I got accepted into the Department of Monumental Art. There, I learnt various techniques such as making church frescos, mosaics, breadboarding etc. Following graduation, I have focussed a substantial amount of my time on teaching fine art to eager students, running a YouTube Art Channel, and recently publishing a 'self-teach' art book based on my teaching methods in Russia.
The most important aspect is the character of each personage and tone. I like to work on different pieces with different technologies simultaneously. This way I never get tired of one particular work and I can enjoy diversity during my work.

2001 - Exhibition in the Moscow City Hall dedicated to the 60th anniversary of the victory of the Russian armed forces over the Nazi forces, Moscow

2007 - Exhibition in Rimini, Italy - Part of the ‘Slovenian Bazar’ Festival