Stay informed about upcoming and past exhibitions featuring Saatchi Art artists. In addition to being the world's leading online art gallery, we collaborate with brick-and-mortar galleries and various other organizations to exhibit the work of some of our most promising artists in shows around the globe. 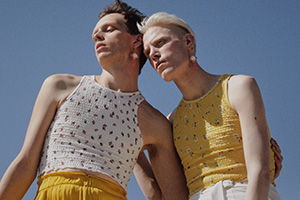 Since the Stonewall Riots of 1969, cities, organizations, and companies have paid homage each June to those whose lives have been defined by and lost in the ongoing struggle for LGBTQ+ rights. Most often, LGBTQ+ pride is visualized in the symbol of the rainbow. While the rainbow signals shared identity, community, and allyship, lived experiences transcend symbols and slogans. This Pride Month, Saatchi Art seeks to highlight artists whose portrayal of LGBTQ+ life goes beyond the rainbow in an acknowledgment that despite increased representation, many aspects of queer experience are still rendered invisible or one-dimensional. In Beyond the Rainbow: Pride in Portraits, we showcase pioneering artists rendering the invisible visible through portraiture. 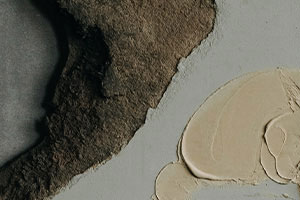 When it comes to art, more and more artists are taking the lifecycle of their materials into account, making their art with an eye towards sustainability and protecting the natural world. This can mean using sustainable materials themselves or making art that consciously encourages conversations about pressing climate issues. The international artists in Masters of Eco-Design: Art and Sustainability represent the vanguard of eco-design, producing their art from recycled and upcycled materials towards diverse conceptual and formal ends. 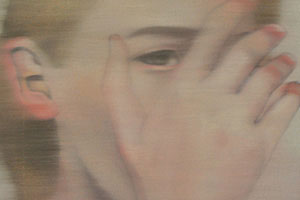 From the Venus de Milo to the Grande Odalisque, women have functioned as artistic muses throughout art history. And for the vast majority of that time, female figures have been filtered through the male gaze. In Portraits of Her: Figures by Female Artists, Saatchi Art puts the perspective of women front and center, featuring over sixty depictions of the female form made by female artists. 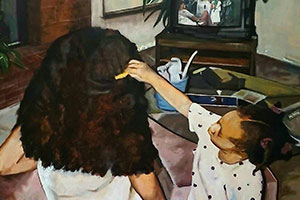 This Black History Month, Saatchi Art is honored to feature Black artists exploring and celebrating their personal and family stories, with an eye towards history’s power and importance. 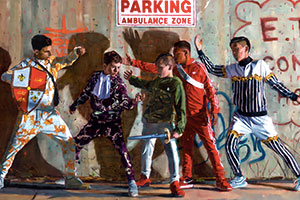 Saatchi Art is proud to present Major Figures, a survey of contemporary figurative painters highlighting artists who approach their subjects and mediums in bold ways, with reference (or reverence) to the art historical canon combined with fresh perspectives. 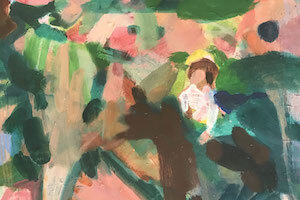 Saatchi Art is proud to present Figures in Time, a solo exhibition and studio sale of works by Anna McNeil. Rendered in loose gestures and aqueous brushstrokes, Anna McNeil’s figures occupy a dreamlike space between abstraction and representation. Often blurring into each other and the hazy space surrounding them, these bodies take part in intimate, ambiguous narratives that explore memory, perception, and human connection. Shop this special Saatchi Art collectors-only studio sale of Anna McNeil's works, and receive a limited-time discount of 30% off. 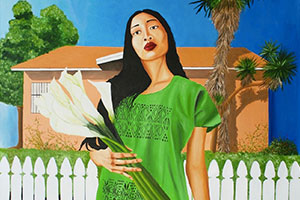 Permeable Boundaries spotlights Saatchi Art artists who foreground Hispanic and Latino American identities, cultures, and experiences in their work. With a focus on US-based artists, this exhibition takes its name, Permeable Boundaries, from a phenomenon seen across these artists' practices: the act of navigating multiple cultures, and exploring the notion of identity as it is shaped by factors that cross cultural boundaries. 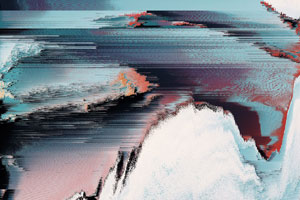 As television, personal computers, mobile phones, and the internet came to dominate 20th century life, a new category of art emerged and met these advancements with a spirit of curiosity and critique. Termed “new media,” the category and its boundaries are expansive, as its practices continue to evolve in tandem with the exponential growth of technology we experience today. Continuum highlights the possibilities of art and technology, and proposes new media as an ever-expanding frontier that artists of varied mediums and backgrounds can approach. 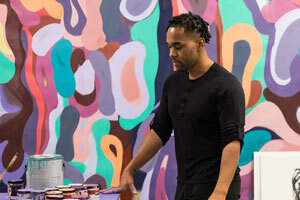 On the occasion of Black History Month, we invited longtime, bestselling Saatchi Art artist Barry Johnson to guest curate a collection of artworks in honor of the celebration. On the heels of a challenging year, we cannot overstate the importance of art as a vehicle for reflection and social change. This crucial function gave rise to the title of this online exhibition—React, Respond, Repair—three words that came to mind as our guest curator selected artworks for this show. 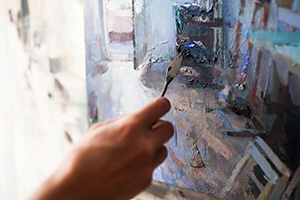 Saatchi Art is proud to present Matter and Light, an exhibition of new works by Spanish artist, Carlos San Millán. In this series, Carlos explores his interior surroundings and reimagines objects of everyday life with color and curiosity. The evocative nature of Carlos’ natural and interior scenes calls the viewer to reflect on the present and project their own memories of place and feel onto the canvas. 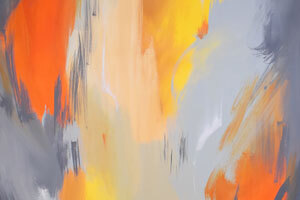 Abstract Expressionist artists aimed to use abstraction for personal expression, viewing their works as direct manifestations of their psyches and windows into universal truths. Explore a collection of artworks inspired by the historic movement. 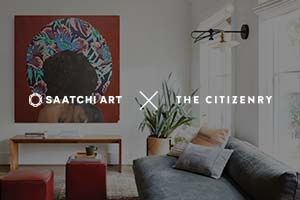 Get your home holiday-entertaining ready with statement pieces that each have a unique story to tell. Saatchi Art partnered with The Citizenry because of our shared belief that our homes deserve art and design pieces with stories you’ll be happy to share. We worked together to curate this stunning collection of original artworks that are sure to take center stage at your next gathering with family and friends. 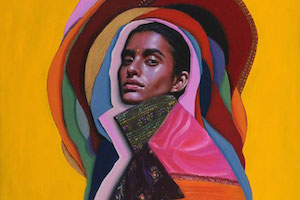 On the occasion of Pride Month, Saatchi Art is honored to present over 50 works that suggest liberation, empowerment, and the potential for queer futures—even utopia. ​The late theorist José Esteban Muñoz proposed the notion of a queer utopia, claiming, “Queerness is essentially about the rejection of a here and now and an insistence on potentiality or concrete possibility for another world.” Explore a collection of works that aspire to a better world while critiquing the present. 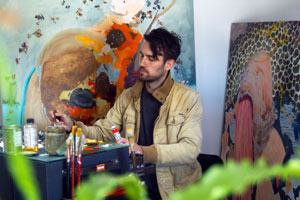 Saatchi Art is proud to present Morphic Reef, a collection of new works by internationally acclaimed artist, Michael Nauert. This new body of works focuses on humanity's genetic predisposition to seek connections to nature, also known as biophilia. Following this scientific hypothesis, Nauert creates works that call attention to the life cycles and minute details of the natural world. These dramatic compositions encapsulate sublime depictions of the artist’s fascination with tide pools and coral reefs. 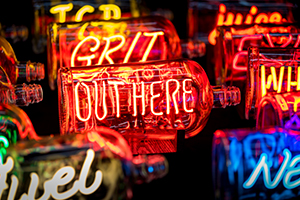 Message in a bottle.

These bottles are part of the Neon Project, Bulleit's ongoing collaboration with neon artist Lisa Schulte. All proceeds will go to the Museum of Neon Art (MONA) for the restoration of historic neon signage. 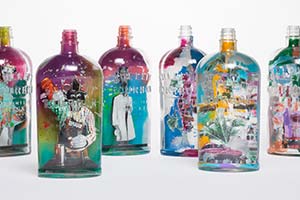 Bulleit Frontier Works is a series of local and national collaborations with modern creators that are pushing boundaries on the cultural frontier. In its latest collaboration, Bulleit Frontier Whiskey has partnered with two South Florida artists, Jason Skeldon "SKEL" and Elidea, to create a limited-edition Art in a Bottle Collection available exclusively through Saatchi Art. The Art in a Bottle Collection merges various mediums and each artist’s unique flare for using materials differently to create something new and unique. 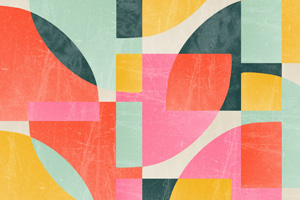 This special collection is part of a partnership we have formed with Eden Roc Miami Beach. Our Chief Curator Rebecca Wilson has curated a collection of works by international artists for the hotel's guestrooms, inspired by Miami’s rich art deco history and a sophisticated beach aesthetic but with a contemporary twist.

Saatchi Art is partnering with Dream Hotels to introduce exciting new emerging artists to guests visiting from around the world. For their most recent collaboration, Saatchi Art Chief Curator Rebecca Wilson installed a collection of works by New York-based artists in the Dream Midtown's public spaces. While all the featured artists reside locally, many of them originally hail from other places such as South Korea and Spain, demonstrating the vibrancy of New York City's art scene.