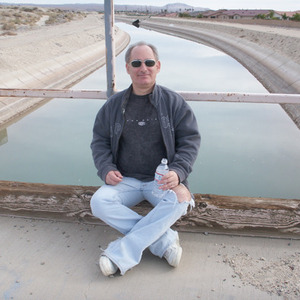 Artist Statement:
From the time I could walk my parents would take me to the New York City museums, dad was a talented commercial logo artist conceiving the original Coca Cola logo among many others. Mid Century Modern always captured my attention and imagination, as a young boy I would sit for long periods of time mesmerized by the shapes, colors and composition.
I pursue a fragmented multiple task effort working on several pieces simultaneously in two main areas of concentration, mid century modern from the viewpoint of a contemporary outsider, and pop surrealistic photography.
My photography apprenticeship was with Paul Kopelow in NYC 1972 at the age of 15. In1975 after graduating high school I opened a commercial photography studio in the NYC Chelsea district. Fine art exhibitions consisted of paint over photographs until the 80s when I dabbled with with mixed media. 2004 marked the first "pure acrylic on canvas, form then on a steady flow of painting, drawing and mixed media followed and will continue until my health fails.
My Mid Century style stems from iconic influences, Frank Stella, Ellsworth Kelly, Adolf Gottlieb, Kazimir Malevich, Sol Lewett, Piet Mondrian, Jackson Pollock, Richard Tuttle, and many others, then branches out to take form from the viewpoint of a contemporary outsider, raw, brut, in nature with strokes of Juan Miro, and Karel Appel,. The primitive aspect of the work is derived from my collective unconscious past, 30,000 BCE, Paleolithic Shaman Hipster Artist, painting images of bulls, bison, and aurochs, deep within European caves.