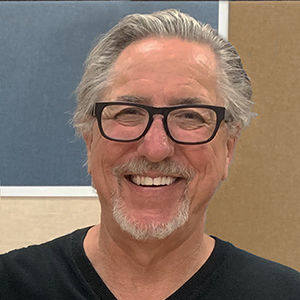 My work as an artist began in 1972, by way of an arts collective called Trans/Media, in Trenton NJ. This avant-garde group was noted for its art installations, music and media events. A forecasting of my future was an event installation that required staging, projection, audio and sensory interactivity. In 1979 I began my design and executive career with Walt Disney Imagineering. Over the next fourteen years I held executive roles creating and constructing EPCOT Center, Pleasure Island, Disney-MGM Studio Tour and Euro-Disneyland. From 1984 - 1989 I held the position of Executive Director for Research and Development. From 1994 – 2000 I was Senior Vice President for Sony Development in Burbank, California, directing the design and development of global entertainment projects. I returned to Disney in 2010 as the Creative Director for attractions in Florida and Shanghai, China. I have always followed my heart with art and design. Now retired as an executive producer, I am pursuing my passion for art in a more personal way.

Self taught, but I have studied at Art Center in Pasadena, Schiller University in London and UCLA. My greatest teachers were the Disney animators and artists from Imagineering's golden age, whom I was fortunate to have worked with.