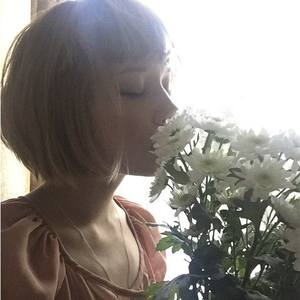 Varya Natkina is a russian painter, graphic artist. Born in 1991 into the large family of a painter and photographer. Varya graduated from The Moscow State University of Printing Arts in 2014.

In March 2019 personal exhibition “Mystic of Moscow" in The State A.S. Pushkin Museum was held with great success. The round table devoted to the art of Varya Natkina with the participation of famous art critics and artists.

Another area of interest for Varya is fantasy literature. She wrote and illustrated a novel-trilogy with over 500 characters and in 2011 presented her work in her first personal exhibition In 2014 The Russian State Literature Museum aquired Varvara’s illustrations to Issak Babel’s “Red Cavalry”.

In 2015 she worked in the game design industry creating three video games based on her own scenarios.

Among her recent projects are decorations for the Roman Viktyuk Theater, a celebrity portrait series for the French Embassy and over 200 graphic works commissioned by Moscow Town Hall and featuring Moscow in the 1980s.

As a graphic artist she applies the technique of textile print which has its roots in the ancient Chinese calligraphic tradition. Each print is unique, made by applying a coloured soft textile surface to artificially aged paper. This technique was almost lost because of its exceptional difficulty. Varya has not only reanimated the old oriental technique but also achieved exceptional emotional impact.

1. The exhibition "About valor, about feats, about glory ...", devoted to the 200th anniversary of the Patriotic War of 1812. Museum and exhibition center "Putevoy Palace" ("Traveling Palace"). 2012
2. The exhibition "Art Start 2013". Moscow. 2013
3. The exhibition "MOSH Russia". March 22 - April 7, 2013
4. The exhibition “We read and illustrate I. Babel”, timed to the 120th anniversary of the writer. Moscow. The branch of the literary museum “House of I. S. Ostroukhov in Trubniki”. 2014
5. Exhibition “The Village of Players” at the Moscow International Book Festival. Moscow. Central House of Artists. 2014
6. Exhibition of book illustration "Such different books." All-Russian State Library of Foreign Literature
them. M.I. Rudomino. 2015
7. Exhibition of illustrations. Poland. Warsaw. 2015
8. International Biennial of Graphics in the framework of the First Pan-European Festival Marathon. Austria. Vein. 2015
9. "Orphic cosmogony". Art objects. ROSIZO. 2015