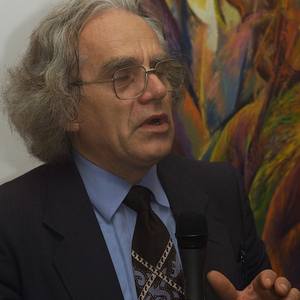 William Tode is one of the greatest protagonists of contemporary art and present on Artprice(search William Tode on artprice.com).
His cultural interests range from visual arts to literature and sculpture. For almost thirty years, he has been one of the most committed and important artists of the Italian Neo-Realism, especially concerning frescoes, He is considered to be one of the last great wall painters, the heir of the teachings of the Tiepolos. He was born in a town near Mantova in Italy. When he was fourteen he attended the Academy of Fine Arts in Modena but for two years only, under the guidance of Master L. Spazzapan, one of the greatest Italian protagonists of Abstract Expressionism. The boy discovered the French painting of the impressionists, but he was especially captivated by Cézanne, Gauguin and Van Gogh, with their colours and shapes. In 1954, soon after moving to Rome with his family, Tode lost his mother, who was only forty-two years old at the time. Art and school were the only areas where he could find comfort for his great pain. In a few months, he worked hard and was able to prepare a five-year-long program. His final dissertation on History of Art was on Michelangelo's architecture. His love for Piero della Francesca, Masaccio, L. Signorelli and Michelangelo will be an important and endless source of inspiration for the young artist’s forthcoming development of aesthetics and work, also in terms of being a "frescante",fresco painter. After that, William started his adventure at the French Academy. Just seventeen, he passed the entry exams by painting a wide selection of nudes by heart, in front of the examination board and in just three hours. In Paris, he met Giovanni March, with whom he became friendly. Thanks to this friendship, he had the opportunity of attending the leading European art printing house, "Le Mercier Charbonnel", where he could test all the possibilities offered by graphics techniques, and realized many lithographic stones. He frequently worked with Georges Braque and Gino Severini. One day, on 16 January 1956, while William was working on a Maternità (Maternity), his friend Giovanni March came over to the printing house, together with the great master Picasso, who liked the young artist and invited him to pay him a visit at his studio. From 1975 to 1977, he created one of his masterpieces, the "Fucilazione dei patrioti baschi",(The Shooting of the Basque Patriots), a large oil on canvas, size 3,8x2,70 mt. From 1979 onwards William Tode’s Neo-realism, defined by Giulio Carlo Argan as “neo-romantic aesthetics and psychology”, experienced a crisis. He then returned to the cubist-futurism style, simultaneously undertaking his research on the analogies between music and colour.
In 1980, the Mantua town council put him in charge of a show exhibition celebrating Virgil's bi-millenary anniversary, with the collaboration of E. Paratore, Carlo Bo and Giulio Carlo Argan. This was opened by the President of the Italian Republic, Sandro Pertini, William Tode invited the great sculptor Henry Moore and all his friends of the Neo-realism group to the exhibition, they included Renato Guttuso, Tono Zancanaro, Augusto Murer, G. Manzù, E. Treccani, A. Borgonzoni and A. Ruggiero Giorgi.
In almost ten years of work the artist created, in his unit “The Parnaso”, a long cycle of frescoes placed in different rooms. Among them, the passionate "Omaggio al mondo della musica" (Tribute to the world of the music) stands out.(Amazing and sensational ...). From 1980 onwards, the artist also worked with ceramics by developing and testing new technologies. In his ceramic fresco, he created large decorative panels, marking a new era in the “third fire” ceramics,for the tile industry. In 89 and 90, he was invited, as the only contemporary artist, to the “CerSaie" exhibition held in Bologna. His ceramic works were also exhibited in Barcelona, Frankfurt, Los Angeles, Miami, New York,Tokyo etc.
We can continue to write, but It's better to talk about his Art, of the master between two centuries.........

Master W. Tode has set up more than 150 exhibitions in 60 year of career, in Italy (Rome, Florence, Milan and many others), United States (Boston and Chicago), Leningrad, Moscow, Frankfurt, Barcelona, Paris, here i post more rapresentative

Master W. Tode has made ​​many exhibitions and received many awards, here i post more rapresentative