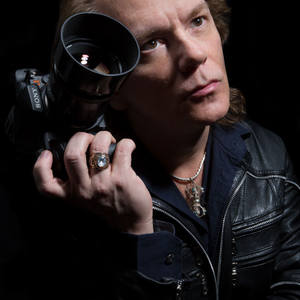 Michael Wisnieux’s favorite subjects have been Musicians, since initiating his professional photography career at age 14. Via articulate expression & emotional connection, their charisma, insightful subject matter, and socio-political issues have motivated Michael’s work. By recording and presenting the world’s most inspiring communicators, manifesting moments of peak performance, Michael shares his love of beauty in sound and image, for others to embrace. —•—

The inspiration for Michael Wisnieux’s photography was seeded by his advertising-industry father. Norbert collected, on cassette & camera, each detail of Michael’s life with loving attention and communication. His grammar-school graduation gift, a 35mm Canon AT-1, quickly enabled professional work; and after graduation from Loyola Academy, Michael designed & built a sophisticated B&W darkroom, developing innovative analog photochemical techniques. He has worked in most formats: e.g. 35mm, Hasselblad, Fuji GX680, & view cameras to 11×14”; extending his style via Scitex, & Macintosh computers since their introduction. —•—

The WISNIEUX ICONS series features large limited-edition prints, elegant color-enhanced digital remasters of his analog originals – some of the most influential figures in rock-and-roll. Michael’s photographic legacy includes covering the historically influential Chicago music scene of the 1980s and ‘90s, e.g. Stevie Ray Vaughan at the 1983 final ChicagoFest; David Bowie's Sound+Vision tour with Adrian Belew; Janet Jackson's Rhythm Nation; and Bjork with the Sugarcubes (all 1990). 40" tall metallic prints of these legendary classics have been seen in elite Los Angeles exhibits. NOW for the first time, they are available for sale – through SaatchiArt.com/Wisnieux ! —•—

Mr. Wisnieux also explores the ethereal and Divine, torn between material necessity and the compulsion to serve Higher Purpose. His Roman Catholic father Norbert decided at age 7 in 1934 to raise his only child named after Michael the Archangel, the "General of the Armies of God." As a "Recovering Catholic and Panentheist," Michael's angelic imagery balances the challenge of good and evil within ourselves and in All that we encounter. We see Dark & Light in his representations of the Divine Masculine & Feminine, Natural & Artificial – as his impulse struggles to "Do the Right Thing." —•—

An artist of multiple media, Michael has consistently combined his love for music, photography, and film – uniting diverse artists in unique, exciting, innovative, and well-regarded collaboration. Michael constantly researches topics from technology to social trends, and invests his time learning each new subject, listening for unique elements enabling expression and empowerment. He is a proud member of the American Society of Media Photographers (ASMP.org), and offers the Wisnieux.com/MasterClass for photographers refining their skills to elevate their work.

“Finessing fine-art photography of musicians, humanity, architecture, nature ~ a full range from meticulous details to grand patterns emerges ~ optimizing arrangements of form, perspective, color, light & technology to share timeless, quintessential images ~ this is perhaps my deepest passion. My life is guided by Higher Purpose ~ always endeavoring to create the greatest good for life in our universe. With each representation of subject & style, I seek to exalt the Spirit, conveying beauty, inspiration and self-realization. Music has been a constant current and frequent focus throughout this journey ~ as we are but waveforms, best served by harmony & congruence. I live to serve Truth, Justice, Emotional Power… to improve myself, and our world.”
— Michael Wisnieux.

Wisnieux.com/MasterClass – for photographers refining their skills, to elevate their work – recurring monthly.

— The enigmatic and diversified Mr. Wisnieux has exhibited his work selectively & irregularly since the 1980's — as he now rebirths classic images and creates nu ones, we shall do our best to keep track of it all! —