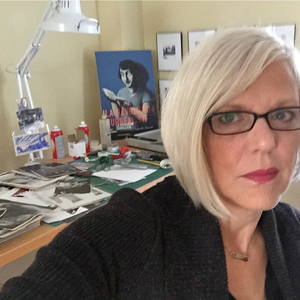 Deborah Stevenson was born in Washington, DC. She grew up in Tokyo, went to high school in Baltimore, and got her BA from Sarah Lawrence College in New York. She lived for many years on the West Coast, and returned to the East Coast, where she lived in Brooklyn, NYC until 2015, when she relocated to the coastal town of Belfast, Maine.

My influences include the pioneer collage/surreal artists: Braque, Ernst, Hannah Hoch, Joseph Cornell, Magritte, to name a few, as well as the German Expressionists in all media. Other influences in visual media include masters in film and photography, both contemporary and classical.

A life-long interest in Eastern philosophy and Jungian psychology have contributed to my fascination with allegory and symbology. Themes that recur in my work express metaphorically my exploration of concepts of power, beauty, the Feminine, and mysterious archetypal conjunctions.

The work arises in an ‘automatic’ way; I do not set out with an objective or goal in my mind when I sit down to make something. The images compose themselves spontaneously as I mix and move the masses of paper around on the table in front of me. I feel as though my eyes and hands facilitate the ‘arrival’ of the pictures that I make. More than anything else, the process requires of me that I pay attention, and to be in a receptive state, so as to be ready to capture the dialogue."

Deborah's work is collected and exhibited internationally and has a robust life on the web, being featured in numerous blogs and online literary/arts journals. She is very active in the vibrant community of collage artists working all around the world, and loves joining in on the many collaborative projects that spring from what is an ever-inspiring group of artists who all play together in the medium we love so much.

Guests at select boutique hotels in NYC and Miami are introduced to her art in luxury settings, where it is included in curated interior design projects.

Articles, interviews, and more include:

2015
Catalogue release - to be announced