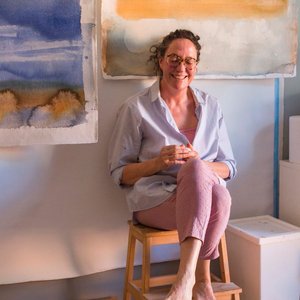 Her painting began with the sweetest memory of her childhood. Her dad used to work with classical music and had a vinyl shop were she went to help him many times, and she remember`s the days when he came home late and closed himself to his zen moment and flooded their nights with chopin, Bach and Ravel.

When she started painting, first figurative, her search was always on abstracts, like a first love, she was already on the way only still do not know it at the time.

When Graça began the abstracts, she immediately perceived the intellectual demand that her choice brought her. There was behind the chosen forms a deep sense of being, and the next step was to discover, why ??? She was painting geometrics, and what was behind that inner message.

That was when Bach came and gave meaning to her work. He brought her back the memories of her father's music, and that was the leap to interpret her favorite`s compositions on canvas like a golden hand that was given to her by fate, as in a dialogue between her and the composer or interpreter. It has become an exchange of emotions, because art is that. Emotion

Graça Paz was born at 4 of March 1967 and lives and works in the north of Portugal in Minho.

She first studied fashion design, followed by an Arts Course in Oporto, Portugal.

Who? What? Why? at SBN gallery Oporto March and April 2019

"Others and me" individual exhibition in Muuda july 2010

"What if I fall...Oh my darling, what if you fly?" Supercosy gallery in Oporto, Portugal November 2014