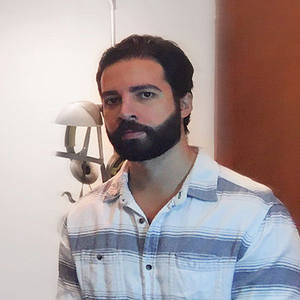 Luis Esquivel (1982, Mexico city) is a multi-disciplinary Mexican artist living and working in Mexico City. He graduated in Graphic Design in 2005. After 10 years of work for graphic design studios and global advertising agencies he launches his own signature Luis Esquivel Neon Art as a medium of self-expression combining design, art and technology where he works on multiple experimental projects.
His artwork goes from large-format murals, sculptures, paintings to everyday objects and is perceived as very striking and seem to be out of context characterized by the use of striking neon color gradients and geometric shapes. He works with a mix between digital print and spray paint techniques.
Luis Esquivel says:
As a society we are in an era where we have gone from analog to digital. As a graphic designer I have always been attracted to analog media but due to the influence of the digital age in which we live my practice had to migrate to digital media is there where certain visual elements attract my attention such as neon color gradient bars that are used as visual resources on web pages design, apps design among other practices related to digital design.
My intention to take those neon color gradient bars out from digital devices and turn them into something tangible through analog medium such as painting and make them last over time as what lives in the digital world quickly loses relevance.
He has exhibited in Mexico city and recently he has been invited to exhibit in U.S.