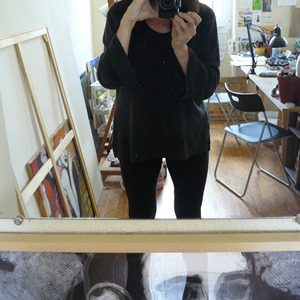 I was born in 1950, in Montevideo, from Italian and French grandparents. I live and work in Barcelona, having settled in Spain since 2003.Painted and drew since childhood with spontaneous commitment. I believe in the ancient, ritual power of drawing and painting, which is maybe as old as our conscience. It is a difficult, complex activity, which can also be very easy going at the precise moment. Always mysterious, unreachable, exhilarating, exhausting, painting is human. My painting is a flat land, a map of intentions, a process in which form and meaning constantly interact. Each and every time I start with human figures, mostly women, in their variety and complexity; searching for the mirror, carrying the wish to understand, the wish to explain. I build scenarios in which those women act: cities, fields, skies. I don't know who they are, but I think I know where they come from: reality, time, art. The substance I work with is colour. Colour, which by perceiving, we make exist. A ghostly game.Thinking that maybe it was too late for painters after the exhaustion of the avantgarde, decided to study architecture. From 1968 to 1979 I devoted myself to motherhood, raising four children, and to architecture's studies and work amidst very dark political ages in Uruguay.In 1979 I had to go back to painting, as a deep need which I could not elude. I studied for two years with a teacher of Torres Garca's studio, and have been working as a painter since then, struggling obsessively around the human figure and the tradition of drawing and painting.In 1986, I studied engraving and photo etching with a Fulbright scholar in Montevideo. Since that year, I decided to work exclusively as a painter, won several prices at Art Contests in Montevideo, took part in a long list of collective exhibitions in Montevideo, Los ngeles, Tokyo, Buenos Aires, Lima, San Pablo, Ro de Janeiro, Porto Alegre, Santiago de Chile, Munich, Berlin, Paris, Barcelona, Madrid, Cadaques and Mallorca; made nineteen solo exhibitions at Museums and Art Galleries in Montevideo, Punta del Este and Mallorca, six at Art Galleries, Universities and Art Fairs in New York and San Diego, and one at the Metropolitan Museum of Tokyo.I have also won a Fulbright grant for New York in 1988.