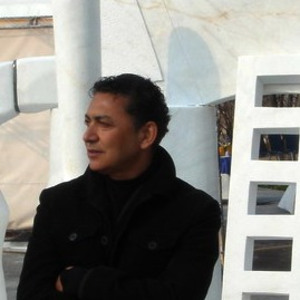 
Ali Jabbar is a painter, sculptor and designer. He is Danish, born in Iraq . He studied at the Institute of Fine Arts in Baghdad , at the Academy of Fine Arts in Baghdad and the Design School in Copenhagen . He created 3 bronze statues in Iraq and participated in the Baghdad International Biennial, the Cairo Painting Biennial, the Tehran Painting Biennial, the Grand Palais Biennial in Paris and the Sharja International Biennial. He also participated in 85 group exhibitions in Denmark, Iraq, Sweden, Austria, Jordan, Egypt, UAE, Lebanon Finland, Poland, Lithuania, Latvia, Estonia, France, USA, Iran, Spain, Turkey, Czech Bahrain, and Norway. In total, Jabbar have done 11 solo exhibitions in Denmark, Germany, Jordan, Spain and London. A Jabbar has also held solo exhibitions at the KM235 Gallery, Hamburg, 1994, the Torre Vella Museum, Salou, 2002, the Herning Art Museum, Herning 2005 and the Hay Hill Gallery ( including fifty works by the French Artist Auguste Rodin) in Mayfair, London, 2011. Despite his artistic demands, Jabbar has taught fine art at Copenhagen high school and has previously lectured in Art at the Omani Arts society and Aria Gallery in Tehran and contributing to numerous symposiums and key conferences, and he was chosen as a member of jury for 6th Tehran international sculpture symposium in 2014.
The multi-disciplined Jabbar has also produced 15 stone and stainless steel monumental sculptures in Istanbul, Tehran, Ankara, Mersin, Mashhad ,Edirne, Manama, Muscat, Beirut and Dubai. His ground breaking works of art have been showcased in the Drammen Museum in Norway, the Fletcher Museum in Denmark, the Kirkeby Museum in Denmark, the Silk Borg Museum in Denmark, the Tehran Contemporary Art Museum . In 1985 and 1987, his paintings won him a 1st prize award at the largest Contemporary Art Festival in Iraq and his sculptures won him the First prizes in the Dubai International Sculpture Symposium in 2005 and the Tehran international Sculpture Symposium in 2007.
In 2015 one of the big sculptures will stand at the world largest sculpture park in Guandou of China, and one the monuments will stand at the Exeter University, UK.
Ali Jabbar will participate in the X Florence international Biennale in October, 2015.
Currently Jabbar resides and works in London.