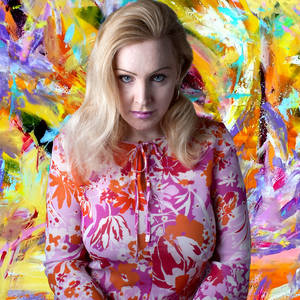 I am a little famous in Australia and a couple of other countries. I started painting as a small child and usually won the school art prizes, first exhibiting at the Berrima District Art Show at the age of 10. After leaving school I started painting abstract pieces while studying towards a physics and maths degree at Wollongong University. During this period I started creating large canvas work, many paintings of which were displayed at public art events. My first solo exhibition was at Wollongong Regional Art Gallery (now called the Wollongong City Gallery) and it was entitled, ‘The 26 Cent Exhibition,’ for people were required to pay 26 cents to enter, while each work cost a total of 26 cents to create. This eccentric show leads to many group shows in the region and also in Sydney at art departments within various universities, most notably at the Sydney University Art Department.

During my varied career, I continued to paint and exhibit and large canvas work using synthetic polymer became her preferred method. In the early 90s, I moved to Japan to live and work and soon afterwards exhibited at the Tokyo Metropolitan Art Museum as part of 'The UNESCO International Friendship Exhibition’ in 1991. This led to commissions, usually from Japanese firms. During this period I also started the ‘Tokyo Eki (train station) Exhibition,’ displaying and selling my work in Shinjuku, Ikebukuro and Tokyo train stations as a permanent exhibition, while contributing to group shows within Tokyo’s art galleries in Ginza, Shibuya and Ueno.

In 2000 I moved to Los Angeles and participated in numerous group shows and sold many larger canvas works. A few years later I returned to Sydney after living and working abroad for 9 years yet continued to exhibit in Los Angeles, in particular as a regular contributor at the Los Angeles Center For Digital Art (LACDA).

From 2008 I started showing work in solo exhibitions in Sydney, most notably at the First Draft Gallery, Global Gallery, Gigi Gallery and several others. I also ran solo exhibitions in regional towns in the country NSW, from Berrima to Scone. During this period I also created digital works in conjunction with my physical canvas works. Since 2010 I have continued to show and sell work through group exhibitions, including shows with the Redfern Artist Group, of which I'm a member.

Hundreds of large abstract canvas works of mine reside in private collections in Japan, the US, England, Germany, France and Australia. While the larger body of my canvas work has been sold to private individuals, many businesses in Japan and the US have also purchased artworks.

In 2010 I published my first art book, ‘Transience,’ a collection of earlier canvas work created over a period of 20 years, which is thematically ordered. In 2021 a second book is planned, entitled, ‘Aesthetic in Abstraction,’ which is a retrospective of more recent large scale canvas works.

These days I reside in the Central Coast of NSW Australia and sell mostly online and through commissions, although I still participate in shows and art fairs internationally.

I've also won many awards and sold many paintings over my career.